In long distance you can see the new landmark of Malmö. Turning Torso looks like a column as it raises towards the sky. A lot of people are amazed by the strange building, of the construction that we´ve never seen the resemblance of and as also tricks our eye. From different angels the house seems to lean in different directions – sometimes more and sometimes less. However it doesn’t lean – it’s just twisted.

It is impossible not to be impressed! Impressed by the creativity of the arcitect as well as the courage of the decision-makers at HSB that dared to do something so very different – in the small town of Malmö.

Turning Torso has been (and is still) something that the local press likes to write about. Even internationally it’s gotten some attention. The local press was during the construction period very busy writing about the large amount of money that was involved. It might be because it is a bit ”un-swedish”. In Sweden we have an expression called ”lagom”. It’s not too much and not too little – it’s in between, it’s like average but never offensive to others. And… this building is not ”lagom” – and that might have been the reason why the press was writing so much about it.

The building is totally different than everything else to be seen in Malmö. It is an odd buiding, higher than all other houses, thin and differently shaped and in fact – it does not fit in. One could say that it is a bit provocative where it is standing looking down on the inhabitants in and around Malmö.

A walk in Västra Hamnen (the Western Harbour Area) of Malmö – and you automatically glance upwards to look at the fascinating Turning Torso. It is impossible not to…. 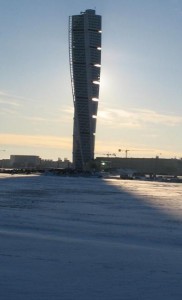 Leaning – or warped? Strange shape of a house? And why build this really high house in Malmö? Malmö is Swedens 3rd biggest city with around 320.000 inhabitants. It’s a flat town without hills or mountains. Since the 1960’ies there has only been one hight building and it’s called Kronprinsen (26 floors). Otherwise the buildings normally are 4-6 floors. The question is if you want to put a high building that would certainly had been enough in order to get attention. So why pick a twisted shape? The critics say that it only makes it more difficult – and more expensive…

Discussions about the building was very common when it was built. Today it’s however a natural part of Västra Hamnen. But even if the building has become a natural part of the city it’s still stunning. When taking a sunday walk, strawling, looking Turning Torso never leave you neutral. And – maybe… that’s exactly the point…..