Buildning Turning Torso – how long time did it take?

Building Turning Torso was a project of 4,5 years. The first cut with a spade was made on the 14th of February 2001. In March 2002 the ground was sat and the concrete was casted.

The concrete foundation in all was finished in August 2002 and the construction work continued adding floor after floor – everything view by all citizens of Malmö. The light has been seen in the cubes and the work has been intense – in order to complete the building right on time.

In November 2005 people started to move in. It was a thorough planning to arrange this procedure. In order to move in without delay and without congestion in the elevators.

The cost of Turning Torso?

What was the cost of Turning Torso? Well, the budget was originally mentioned to be 550 million swedish crowns (appr. 55 miljon Euro). Finally figures like 850 millions has been mentioned , but others say that the bill ended at 1,5 billion swedish crowns. Originally the plan was to make tenant-ownership but due to high costs it ended up to be a house of rental apartments instead.

HSB (the company that owns the house) has been criticized for building such an expensive house. On the other hand – the building of the house has given a lot of attention and also been described as a forerunner – something that has put the town of Malmö at the map – even in an international perspectiv. 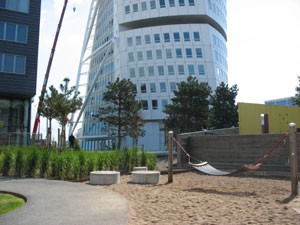